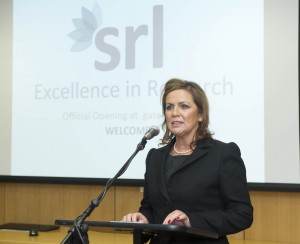 Margaret Shine, CEO, speaking at the opening of our new offices in gatewayUCC

Our CEO, Margaret Shine featured in an article in the Sunday Times newspaper on the 5th of January. The article detailed Margaret’s early career, the inspiration for setting up the company and the road map to where SRL is today.

The article in the Sunday Times also discusses the decision to merge with another Cork based sensory research company, Independent Sensory Services, which was announced at the end of 2013. Margaret sees the merger as the next phase of growth for the company. It allows SRL to consolidate its position in the Irish market, while also expanding our resources for sustainable growth internationally.

The Sunday Times article goes on to mention SRL’s recent accreditation in ISO 9001 and the recognition by Certification Europe of this achievement. Margaret concludes the article by describing some of the work involved with running a sensory research company and her ambition for expansion in 2014.

SRL is a globally recognized Scientific Management Consulting Company. Our core business specializes in product understanding by the use of sensory and consumer research integrated with emotional engineering ...Read more